Transformer protection- Some typical equipments for protecting a transformer

Below are some transformer faults that commonly happen. We also have transformer protection device to prevent transformers for these faults.

1. Stresses generated by the supply source-protection of transformer

2. Stress due to load

4. Errors between turns should be carefully considered

1. Stresses generated by the supply source- protection of transformer

Two types of over voltages may stress and even destroy a transformer:

For example, voltage conversion is caused by opening a circuit breaker or a load breaker.

Depending on the application, protection against these two types of voltages may be necessary and is usually ensured by ZnO surge protectors, preferably connected on the transformer MV bushing.

2. Stress due to load

The protection of the transformer against overload is accomplished by a dedicated protection commonly referred to as the thermal overload relay. This type of protection simulates the temperature of the transformer winding which is based on current and thermal time constant measurements of the transformer. Some relays can consider the harmonic effect of currents due to non-linear loads such as rectifiers, computers, variable speed transmitters, etc. before emitting collision order and time delay then the transformer is energized again.

In addition, the oil-filled transformer is equipped with a thermostat that controls the oil's temperature.

Dry-type transformers use thermal sensors embedded in the hottest part of the insulation of the windings.

High level to de-energize the transformer.

Defects inside the oil-filled transformer

In an oil-filled transformer, internal faults can be classified as follows:

The main faults of gas generation are:

Micro arc due to initial fault in coil insulation

Slow degradation of the insulation material

These errors can be the result of external lightning or from overvoltage switching.

Depending on the transformer type, there are two types of devices that can detect an oil-filled transformer's internal faults. 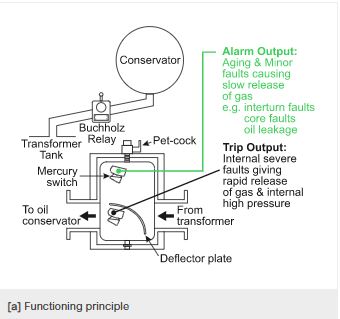 Buchholz was installed on the pipe connecting the transformer tank to the storage machine (see Figure B16b). It retains slow emissions and detects oil backflow due to internal pressure 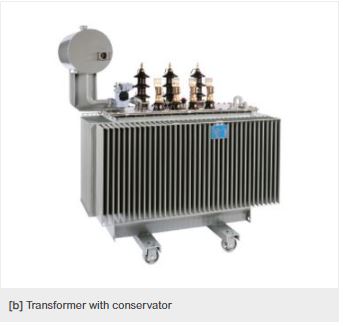 DGPT (Gas, Pressure and Temperature Detection,see Fig. B18) for integrated transformers (see Fig. B17). This type of transformer is manufactured up to about 10 MVA. DGPT as buchholz detects gas emissions and internal pressure. In addition, it monitors the temperature of the oil. 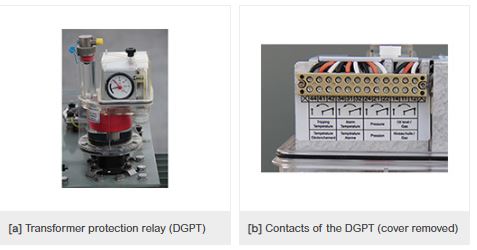 With regard to gas and temperature monitoring, buchholz and DGPT offer two levels of detection:

In addition, both buchholz and DGPT are suitable for detecting oil leaks.

Internal faults, mainly between loops and ground-to-ground short circuits occur inside a dry-type transformer cleaned with a circuit breaker or fuse installed on the primary side of the transformer. When used, the ground contact of the circuit breaker is arranged in phase-to-phase order and phase to earth for overcurrent protection.

4. Errors between turns should be carefully considered:

They usually produce moderate flow across the line. For example when short-circuiting 5% of the HV coil the transformer current does not exceed 2 In, for the short-circuit affecting 10% of the winding, the current is limited around 3 In.

Fuses are not suitable for the proper removal of such currents

Dry-type transformers are not equipped with additional protective devices such as the DGPT dedicated to internal fault detection.

As a result, internal faults that produce an excessively low current may not be safely released by a fuse. Protection with an overcurrent relay with the right characteristics and settings (e.g. Schneider Electric's VIP relay strip) is preferred).