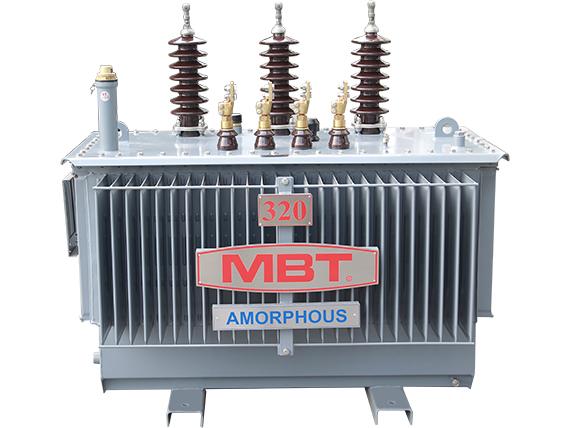 What is an Amorphous transformer, and how it works?

An electrical transformer is an essential device in the distribution and transmission system of electricity in the national grid electricity system. Along with the development of technology, the transformer manufacturing industry has also overgrown in recent years. Amorphous transformers were born with many outstanding features that outperformed those of the same type: saving operating costs, reducing CO2 emissions into the environment, increasing product life cycle, ...

The molten alloys are rapidly cooled at a rate above 1 million ° C per second to produce amorphous metal. Amorphous metal is a metal that has no crystalline structure, which imparts different properties in different directions. In other words, this metal has a random atomic structure, which makes it extremely useful in transformer applications. It has both high permeability and excellent soft magnetic properties.

The amorphous transformer structure is the same as an ordinary transformer's general structure. The main difference is that the core of a transformer is made from amorphous metal.

The structure of the amorphous core specifies the windings of rectangular construction. Once the design has been established, the magnetic circuit's rectangular profile is resistant to short-circuit stresses. The magnetic circuit consists of pre-assembled single-phase coil sheets, incubated at about 3500 ° C. Once the magnetic circuit has been installed, it will stiffen and act as mechanical support on which all the transformer elements rest.

Because the amorphous material is so thin, to avoid the appearance of core debris by applying the following procedure:

For transformers with a rating above 250kVA, the silver paper should be used for the LV (low voltage) windings. This reduces the axial force and increases the short-circuit resistance of the transformer. We use epoxy diamond dot paper (EDD) as interlayer insulation for LV & HV (low pressure and high voltage) coils.

EDD paper is created using a heat-resistant plastic in the form of square dots on both sides of the kraft paper. The pattern of the plastic dots ensures that there is enough space between them for oil impregnation. The coils produced by this process are dried in an oven in which the plastic melts and hardens. Through this process, the layers are glued together, and the complete coil becomes a solid block.

In Amorphous transformers, the presence of steel core debris is inevitable. During the manufacturing process, the core overlap area is located at the bottom, and the compartment layout is provided for the core. As a result, any core debris that has formed is collected in the workpiece containment system and does not float in the oil.

An amorphous core transformer's total cost is approximately 20% to 30% higher than that of a CRGO Core Transformer.

Why does the amorphous core have a rectangular cross-section?

For a circular cross-section of the core, the average length of the rotation is reduced, so the mass of copper used in the coil decreases; thus, the transformer's cost is reduced by reducing winding costs.

Because of its limited brittleness, in amorphous core transformers, manufacturers use a square or rectangular cross-section of the core.

An amorphous metal core transformer's great benefit is that the amorphous steel core has a lower hysteresis loss. Since there is no atomic arrangement law, the small energy loss (delay) when the induced current flows through the iron core.

Besides, eddy current losses are reduced because of a thickness of approximately 0.03 mm, about 1/10 of silicon steel. The no-load loss rating is 1/4 to 1/3 of transformers that use traditional silicon steel for the core. By the way, the temperature in this amorphous steel core is low, which will significantly reduce the amount of air CO2 released into the environment.

Two types of energy losses are inherent in a distribution transformer's operation: Load losses (copper losses) vary depending on the transformer load, and no-load losses (iron losses) occur out in a magnetic field. When this is replaced with amorphous metal, the transformer's core is reduced by up to 75%.

a. Advantages of amorphous transformer

In the past, awareness of global warming and gas emissions was not as concerned as today, and the concept of "Energy Efficiency" was not a priority in transformer design. The Amorphous Core Transformer is an alternative to conventional transformers. It is mainly used to reduce no-load losses compared to conventional core transformers, thereby significantly saving energy.

b. Disadvantages of amorphous machines

Besides these outstanding advantages, amorphous transformers also have the following disadvantages:

The manufacturing process for the amorphous steel core:

MBT is a brand of transformer products that have a high reputation in the market. With the strength of experience and technological lines in manufacturing, a good team of engineers, skilled technical workers, and abundant customer partners in many areas, so we are always leading about quality of service and price.

We design, manufacture, and supply all kinds of electrical transformers with a dedicated project manager and a 24-month guarantee from dispatch.

With the business motto: "A satisfied customer is the best business strategy of all," and over 11 years of experience in transformer design and manufacture. We, MBT, are confident of being the best Transformer manufacturer in Vietnam.

Contact immediately +84913 006 538 or email: [email protected] for a free consultation and support and receive the most preferential quotation.