A Dubai-based project described as the “first industrial scale, solar-driven green hydrogen facility in the Middle East and North Africa” has been inaugurated, with those behind the development hoping it will help catalyze the region’s renewable energy sector.

In a statement Wednesday, Siemens Energy said power for the pilot project — a collaboration with the Dubai Electricity and Water Authority and Expo 2020 Dubai — would come from the Mohammed bin Rashid Al Maktoum Solar Park, a vast solar facility slated to have a production capacity of 5,000 megawatts by 2030. 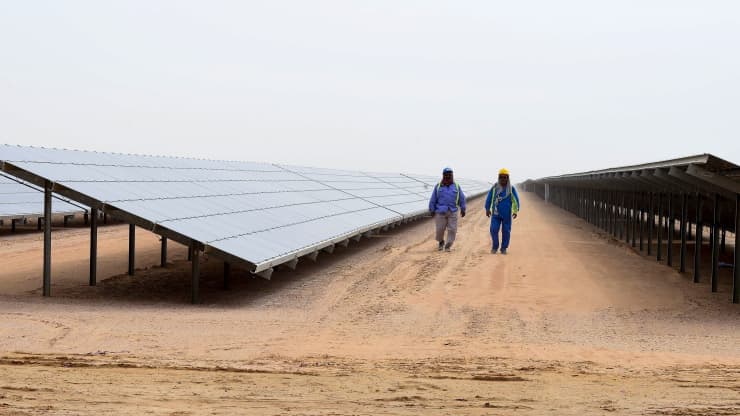 Workers photographed walking past a section of solar panels at the Mohammed bin Rashid Al-Maktoum Solar Park in Dubai on March 20, 2017.

Described by the International Energy Agency as a “versatile energy carrier,” hydrogen has a diverse range of applications and can be deployed in sectors such as industry and transport.

It can be produced in a number of ways. One method includes using electrolysis, with an electric current splitting water into oxygen and hydrogen.

If the electricity used in the process comes from a renewable source, such as wind or solar, then some call it “green” or “renewable” hydrogen.

Currently, the vast majority of hydrogen generation is based on fossil fuels, and “green” hydrogen is expensive to produce.

In an interview with CNBC’s Dan Murphy, Siemens Energy CEO Christian Bruch was asked when the plant in Dubai — which is based at a DEWA testing facility at the Mohammed bin Rashid Al Maktoum Solar Park — would be commercially viable.

Bruch explained his firm was “investing a lot of money” to develop the technology. “But I think we’re now in a situation where some of these elements could accelerate very fast,” he said, going on to draw parallels with other sectors.

“If I look back on photovoltaics, it is not so long ago that everybody … said ‘it will never fly commercially,’ right?” Photovoltaic refers to a way of directly converting light from the sun into electricity, with the technology used in solar panels.

“Wind (was) the same … ‘this is never going to be competitive against hydrocarbons, it will not work’,” Bruch said. “It went much, much, much faster than we all believed once it got scaled,” he added.

“And the same thing we may see here. We still have some way to go. So we still need bold movers and this pioneering spirit but I think now, with these types of projects, we can accelerate.”

Dubai is part of the United Arab Emirates. A member of oil cartel OPEC, the UAE is a significant producer of crude and gas but is also blessed with a huge amount of sunshine, the crucial ingredient for solar power installations.

While it’s a major player in fossil fuels, Bruch was asked how much green hydrogen the UAE would be able to produce, and whether he could see a future where it became an exporter of hydrogen.

“I wouldn’t see the limitation, really, on it from the UAE perspective, seeing also the massive resources you have on the renewable side.”

“I do believe it must be, it will be, it should be, one of the key future commercial models in the UAE and the wider region, to be also, in future, an energy exporter for the world.”