What is the Polarity Test?

The polarity can be defined as the induced voltage direction in the primary windings and the secondary winding. If two transformers can be connected in parallel, then the polarity must be identified for a good connection of the transformer.

The important role of the polarity test is to make sure that all single-pole devices like switches, circuit breakers, and fuses are allied only in the phase conductor.

Types of the polarity test

There are two types of the polarity test: 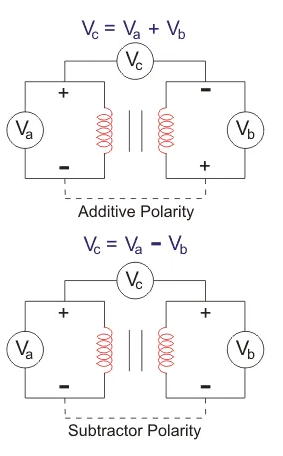 In additive polarity, the voltage (Vc) between the secondary side (Vb) and the primary side (Va) will be the sum of both the low voltage and high voltage.

In subtractive polarity, the voltage (Vc) between the secondary side (Vb) and the primary side (Va) will be the difference of both the low voltage and high voltage.

The procedure of the Polarity Test of the Transformer

2.         If available, take down the ratings of the transformer and the turn ratio.

3.         We connect a voltmeter (Vc) between secondary and primary windings.

5.         By checking the value in the voltmeter (Vc), we can find whether it is additive or subtractive polarity.

If subtractive polarity – Vc should show the difference between Va and Vb.

If additive polarity – Vc should show the sum of Va and Vb.