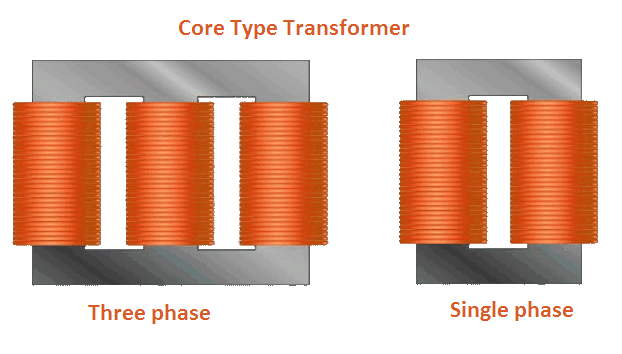 A transformer is a unit transferring electrical energy from one electrical circuit to another circuit, or multiple circuits.

The transformer has a magnetic core and the secondary and the primary winding around the core. Depending on the shape of the magnetic core, Transformers can be categorized into the shell type and core type. 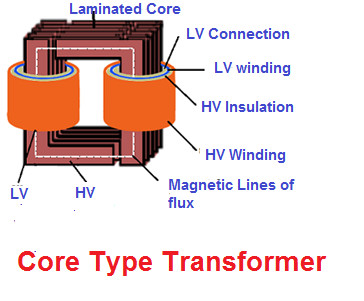 The main disadvantage of a core-type transformer is that all the flux produced in the primary does not connect to the secondary and some parts of the flux do not connect. Therefore, the leakage flux in the core transformer is more than the flux usage in the case transformer. Because of easier access of the winding during maintenance, the core type arrangement is best suited for the large rating transformer. If the fault is detected in the inner winding, the inner winding can be removed after removing the outer winding.

For a large rating transformer, the thick winding conductor is used to carry more current. It is hard to bend the thick conductor in a rectangular or in a square shape. The best choice for the large rated transformer in view of optimizing the use of copper conductors is the round cylindrical-shaped winding. When the round cylindrical-shaped winding on a square cross-sectional core limb is used, the significant amount of space between the core and winding is unused. The stepped cross-sectional core is used to reduce this unused space. To form a nearly circular cross-sectional core, the lamination of different shapes is staged. The cross-section of the core might be one stepped, two- stepped, or multi-stepped.